Hello everyone!  In this quarter’s newsletter we’re going to cover scareware, general maintenance tasks that can be done to keep your computer working well, and some discussion on what mesh wireless networks are, and how they work.  So, let’s dig in!

What is Scareware?  Scareware is a pop up that show up while on the internet telling you, you’re infected.  You are not infected, it is not until you take action with the popup that you get infected (by clicking or calling). 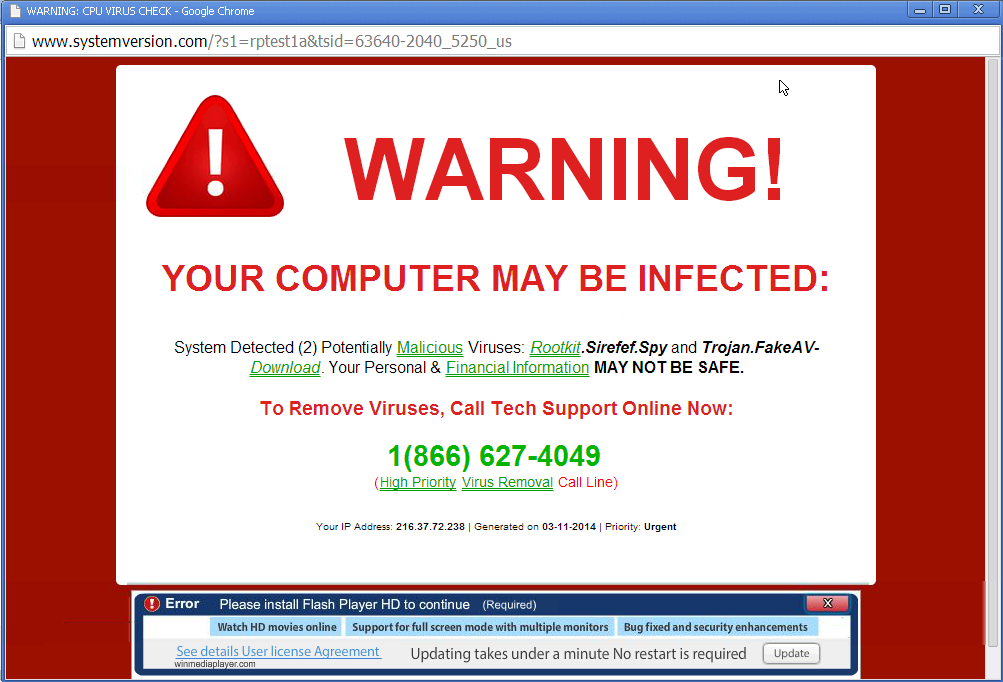 If you get a page that tells you that you are infected with XXX many viruses and to call their tech support number right away. There are even ones that talk to you urging you to call right away.  DON’T! What’s happening is your browser has been hijacked by the people claiming to have identified your infection. If you were to call, they will appear to be legitimate as they request your access to your computer and payment information.  Because this is attempting to ‘get a reaction’ from you both PC and MAC computers are at risk. HP, Dell, Microsoft and all other legitimate tech will only call you when you have initiated a call to their support. Additionally, and unfortunately, due to these scareware tactics, if you attempt to Google or execute a web search for one of these legitimate company resources, it is even possible that the page you find is a fake landing page published by these malicious persons.  (Look in your computer software or printed documentation for a customer support number.)

What can you do now?  If shutting down didn’t solve the problem, we can usually walk you through resetting your browser over the phone.  If you clicked on/called the number, Shut Down your computer and call us. Most spyware can be cleaned off your computer in about an hour ($125).

General Maintenance for your Computer

Mesh nodes are small radio transmitters that function in the same way as a wireless router. Nodes use the common WiFi standards known as 802.11 to communicate wirelessly with users, and, more importantly, with each other.

Nodes are programmed with software that tells them how to interact within the larger network. Information travels across the network from point A to point B by hopping wirelessly from one mesh node to the next. The nodes automatically choose the quickest and safest path in a process known as dynamic routing.

The biggest advantage of wireless mesh networks — as opposed to wired or fixed wireless networks — is that they are truly wireless. Most traditional “wireless” access points still need to be wired to the Internet to broadcast their signal. For large wireless networks, Ethernet cables need to be buried in ceilings and walls and throughout public areas.

Using fewer wires means it costs less to set up a network, particularly for large areas of coverage.

Give us a call!

Fixed my network next day and everything is good now.

Brett was fantastic and provided quick service.  I would recommend this company to anyone, stranger, friend or family.  They are superb.  By far, the best experience I’ve ever had with a computer services company.

We provide award winning computer, networking and internet solutions for both the homes and business in the Minneapolis and St. Paul areas.

Winner of Angel's list " Super Service Award" for Excellent service every year since 2005, an award given out to fewer than 2% of the companies listed with Angie's List!